top of page
This site was designed with the
.com
website builder. Create your website today.Start Now

Happy Thursday everyone! I hope you enjoyed your holiday weekend. Ours was packed with a new adventure and lots of new friends, but more on that later...

Today I am beyond excited to share with you the beginning of our kitchen renovation! This room was one of the biggest transformations in our home, which is funny because we had no intention of taking the changes to the kitchen this far. Initially our thoughts were: "We'll paint the cabinets, update the hardware, paint the walls, nothing crazy." By the time we finished we had a new layout, new cabinets, new floors, new walls, the works - but before we get to all that, let's start with the test flight layout and subfloor.

The original kitchen was a U-shaped layout including a peninsula with additional seating at the counter in the dining area. This setup made sense with the original smaller doorway to the living room, but now that we had more of an open concept, there was a lot of wasted space in the middle of the kitchen. A lack of storage space was also an issue, which led to the thought: Why not add an island to create a galley? To test out our new idea, we detached the peninsula and swung it to where the island would be. From there the decision to change the layout was a no-brainer. Renovation tip: Whenever you are making major changes to a layout, test it out first if you can. Even using household objects as place holders will give you a sense of the space before making any permanent changes (we placed cardboard boxes where the island would be before even moving the peninsula).

The next step in making room for the new was to get rid of the old. Erik posted our kitchen cabinets on Craigslist and local buy-sell-trade sites. Within a few days, we had a blank slate and a handful of cash to throw into our kitchen project. Renovation hint: before throwing anything out, try selling it first - you may end up with some extra financial fuel and someone who is willing to help with the hard labor of getting your stuff out of the way. At this point in the process, our kitchen was officially unrecognizable and by unrecognizable, I mean non-existent. Another major lesson we've learned from these renovations is how to be adaptable - and it's amazing what you can learn to live with (and without)!

Preparing for the subfloor involved a lot of arranging, and rearranging, and rearranging. The fridge and stove were moved to the living room and office so the subfloor could be installed in the kitchen. We bought some shelving units to hold all of our commonly-used dishes and utensils with the intention of using these in the basement and garage once the kitchen is complete. Everything that we don't use on a daily basis (food processor, grilling tools, extra crockpots, etc.) were packed into Rubbermaid containers, which will also be re-purposed as attic storage later on. No unnecessary spending here!

As I mentioned in earlier posts, the kitchen floor was on a significant slant, so we decided the most effective fix would be to put our new flooring right on top. But first, we needed to level the floor. Erik shimmed the subfloor to over an inch in the far corner of the kitchen, adding supports to the middle of the plywood planks. This took very careful measuring to ensure we had a level foundation. He then secured the boards by screwing into the grout lines between the tiles, which required more careful measuring. We also added subfloor to the back entryway to keep everything on the same plane.

Once the plywood was secured, we moved the appliances back into the kitchen and temporarily remounted the sink. Then came the self-leveling cement. This stuff is messy, but very cool. It took several bags to put the final touches on our very un-leveled floor. A short 24-hours and a few hundred hops back and forth over the wet cement to the kitchen, and we had a level foundation for our new hardwood floors.

I can't wait to share the next phase of our kitchen reno - stay tuned to watch these floors transform with new engineered maple hardwood! 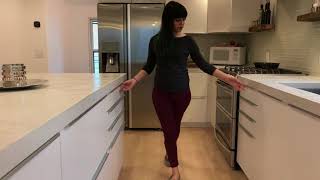